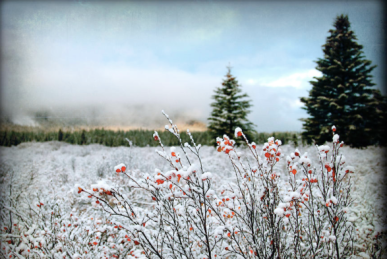 When I was little Santa Claus was much more real to me than God.  I felt pretty certain God existed but He was somewhere up in the sky, uninvolved with life on earth and uninvolved with me. But Santa Clause, that was entirely different.  He lived in the North Pole with elves and reindeers. He was a jolly, fat man who loved cookies just like me. He was involved, he paid attention,  he knew when I was naughty or nice.  Santa also knew I believed in him and once a year he would prove it by leaving many presents with my name on it under our tree.

My little heart was shattered when I eventually learned the truth. How could Santa not be real?  I took it personally and felt as if my foundation of belief had been broken.  If Santa wasn’t real then who was?

This morning the chorus of a worship song I was listening to, moved me to lift my hands in prayerful surrender. “Take me back, back to the beginning, when I was young, running through the fields with you”

Palms toward heaven, my memories were ushered back in time, first recalling the little girl who adminately put her faith in Santa Clause, then the age of disappointment that followed. And then later in adulthood when to my surprise I was overpowered by the reality of God’s  truth, grace, love, mercy, forgiveness, hope and healing through His Son.

This discovery of faith in Jesus, left me feeling like a child running through the fields, with not a care in the world.

Decades later, I still love the magic of Santa Clause, elves and reindeers during the holidays but experiencing a daily relationship with God, witnessing His faithfulness through the good and the bad of life has restored my foundation of belief, one that is rooted in Truth and that will never be broken.